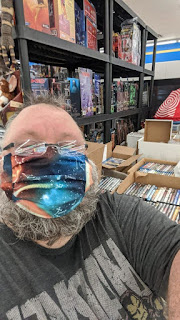 Where I'm living now, which is very rural, we have Covid but not in the numbers that afflicts the larger counties of Texas. That's not to say that we forgo all common sense and flaunt our immune systems, though. I feel that we may be more common sense about it out here than anywhere because I definitely see more face coverings than I do when I venture back into heavily populated areas. We all wear them when we can't social distance and we wash and sanitize those hands!

I took a chance on moving some old store product at the Hunt County Comic Expo, not really worried about the pandemic because of the above realizations. I also knew that the guy putting the show on wouldn't balk on taking care of the vendors and show-goers. And he didn't.

Brigandry Games in Commerce, Texas has enough space that Cody Glenn could space the aisles out to give visitors room to move. Vendor spots were still next to each other, but that wasn't a worry. Sanitizer was everywhere. Everyone was required to mask up from the time they walked in to the time they left. I was wearing a mask that my mother-in-law had made. It was 2-ply and thick. Occasionally, I had to catch a quick breath for my lung capacity has never fully recovered from my issues back in 2017. Other than that, everyone did their part to make it a safe day.

But, the turnout was still low. I can't blame anyone for being worried about the second wave. It's gonna happen, the question is how big will it be. I have a friend back in Ft. Worth who tested positive the day before the event (she isn't connected to it in any way) and is at home going through mild symptoms.

My next door neighbors were Wednesday's Mid-Week Break in Denton and Castle Jones Vintage. The big draw was voice actress Stephanie Nadolny who voices multiple characters in the Dragonball Z franchise mainly Gohan and Young Goku. For those of us who are older and know Vince Vance and the Valiants, well, she sang with them, too. Plenty of cosplayers present so checkout Daniel Calhoun's Captain AmeriDad page to see the highlights there.

A date is set for next year and hopefully we will have vaccines and be on our way to normalcy or the "new normal" or whatever you want to call it. I don't know if I'll be back, since I don't have any more product, but I do know that I'll be spreading the news about it and visiting myself, because we need that social contact and community especially in times like these. Just make sure to mask up, sanitize and distance.

Stay safe and check out the the Facebook Page for photos from the show.