Back on January 5th and 6th, I had a table at the North Texas Comic Book Show where I had a few creative types submit themselves before the masses. Ronald Dunn, Todd Boddy, and Thomas Branch were able to come out to the Doubletree by Hilton at Dallas-Market Center and make new friends and fans.

If you’ve never been to one of these, it’s a smaller version of a comic book convention which means smaller cover charge, smaller venue, and smaller crowds but the same chance to find that certain something for which you’ve been searching. I was able to add my Hot Wheels Batmobile set and get turned on to a new one and would have replaced some old comics from years back if I hadn’t gone to the restroom first! Oh, well. Timing is everything.

Something that Tom and I noticed was that there are a lot more kids at these events than the bigger conventions and I think it’s because it doesn’t cost an arm and a leg. We love that! We love seeing the kids come in and take an interest comics and fandom especially when they’re taking an interest in an icon like Lou Ferrigno. A mom and three or four girls ranging in age from 10 to maybe 13 were perusing comics next to us and I remarked how cool it was that they liked comics. Tom asked if they also saw Lou and the mom said yes, but admitted that she had to pull up some Youtube videos of the original Hulk TV show to show the girls. They were excited to meet him and had a blast. I hope my daughter learns to love this stuff, too! 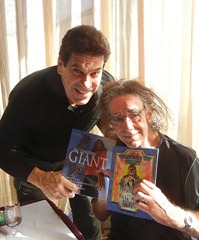 In addition to Lou Ferrigno, Peter Mayhew was in attendance and signing autographs. It’s kind of cool that DFW can be called the home of Chewbacca the Wookie! He raises goats somewhere on the outskirts of the metroplex and I’ve tweeted with him before about them as my father raises the same type of goats. When I walked up to his table, I asked him about his goats and just like my father, his eyes lit up and he started telling me all about them. Maybe I should get my Dad on Twitter and introduce the two of them!

Everyone at the table had a great experience and we are looking forward to Scifi Expo and ConDFW next month. Though Ronald wasn’t there on Sunday, I put in a blurb about him when we got interviewed by The NERD Show on 1190 AM. I, Tom Branch, and Todd Boddy will have our Q&A’s aired in the next week or so, so be sure and listen.