What a weekend! If you haven’t been to one of Chris Latshaw’s quarterly comic book events, then you’re missing a real fun time. I’ve been a part of the show for a little over a year and a half now, and I can’t think of a better way to spend a weekend than with a group of comic book lovers amongst the stacks of possible treasures. 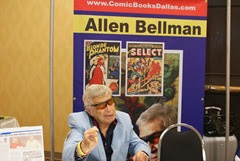 With this show, we were graced with the presence of a artistic veteran, Allen Bellman. Mr. Bellman, at the age of 89 (I think), still gets around very well. I approached his table and he greeted me with a great big smile and a line of how he was there with Stan Lee from the beginning. A story for fans, old and young, you couldn’t help but want to hang out and listen. And cool artwork, also. Considering the years that Allen worked at Timely Comics, which eventually became Marvel, I just had to have the piece of Captain America delivering a punch to the chin of Adolf Hitler.

I was lucky enough to get invited to dinner that Saturday night with the guests. Dining with my friend Tom Branch, it’s pretty cool to sit down and eat with people in the industry. Though Tom listened to Ron Marz, Ron Frenz, and Tom DeFalco for most of the meal, I enjoyed the conversation with Mr. Bellman and his wife, Joe Corroney, and Ron Marz’s wife. Plus, the fact that I got to chauffeur Corroney and Frenz in my car was pretty cool, too.

I sold some books, and then turned around and gave most of it right back picking up an Amazing Spider Man #252 (autographed by Frenz and DeFalco), got a Red Sonja #1 (1973), and this cool Iron Man Arc Reactor USB Drive!

If you got a chance to come by and have photos, please go by my Facebook page and share some links!