American Vampire’s Rafael Albuquerque brings a tale of his own that catches you at the start and won’t let go! Pilot Joshua wakes up with amnesia and slowly reconstructs what happened as he figures out what is going on. 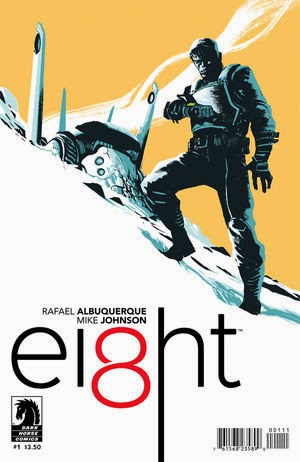 Co-writing with Mike Johnson (Supergirl), Albuquerque tells the tale of Joshua who has made a deal to find someone. We only find this out as he regains this info from his amnesia. Waking from a crash in the middle of an unknown landscape. He learns a little at a time and we are right there with him. We learn that he has traveled in time (across dimensions, maybe) and has a communicator with a voice that he doesn’t recognize. Told to follow a dinosaur, yes, you heard right, he comes to learn more about his predicament.

With Albuquerque’s art style which I’ve come to love in American Vampire, the color that added to his lines really make this a cool looking read. The story is gripping and I’m ready for the next installment. Dark Horse has added another great title to their stable and this is the reason I don’t read a lot of titles from the two big dogs anymore.

What’s you’re favorite pick of recent publishing? Tell me all about it!