Tugg - A Hero Among Us

November 18, 2017 is going to be a busy day. Not only is it Local Comic Shop Day, Justice League Day, and our monthly Sci-Fi Meetup, but we will be graced by the presence of Tugg, the real-life superhero!

If you've never met Tugg, he is a most-lovable bull terrier. A rescue dog that was tossed aside, he found a human who gave him love and a home and nursed him back to health. It's a heart-breaking beginning that leads to a heart-warming future as Tugg becomes a superhero.

Tugg's owner, Blake Ovard created a comic series that stars the lovable dog and uses it to highlight the plight of animals in need of rescue, bullying and many other social issues. With proceeds going to animal rescue, Blake is releasing Tugg #4, the completion of a four-part series.

So join us Saturday November 18th from 1 to 4pm with Blake and Tugg! We will have plenty of comics and other items, so come in and get a pawtograph from Tugg - A Hero Among Us! 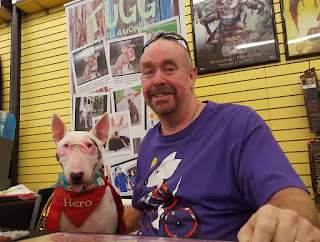