How are you passing time at home these days? Binging Netflix? Comics and novels?

Me? I'm reading some Clive Cussler (who just recently passed) Dragon. I've always been a big fan and have read many of his novels, but the man was almost as bad as James Patterson when it come to putting out a book (or more) a month. Great action adventure! He's had two of his books turned into movies. One was the appalling Raise The Titanic in the early 70's which he had some choice words about at a signing at Park Lane Barnes & Noble. The second was Saharra with Matthew Mcconaughey. He didn't entirely like the movie but he says that he did like the casting of Matthew as Dirk Pitt, the main character.

I'm also binging Altered Carbon Season 1 on Netflix. I didn't know that it was based on a book series, so I'll probably pick that up here pretty soon. Season 2 is already out with New Orleans native Anthony Mackie (The Falcon) as the lead character. 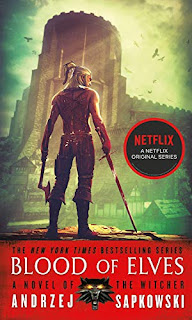 I'm also reading the Witcher series before I get into the show. I was tempted to watch first, but changed my mind, since I'm already watching something. It's easier for me to read more than one book at at time, but not TV shows. Do you multitask when it comes to consuming?

And last but not least, I'm playing Pathfinder: Kingmaker on the PC. The game engine and some of the characters are based on (intentionally or not) the Baldur's Gate series from Bioware. I still love that one.
Share what's floating your boat right now!

The Witcher: Blood of Elves by Andrzej Sapkowski

Join me on Steam

Disclosure: Bear in mind that some of the links in this post are affiliate links and if you go through them to make a purchase I will earn a commission. Keep in mind that I link these companies and their products because of their quality and not because of the commission I receive from your purchases. The decision is yours, and whether or not you decide to buy something is completely up to you.