Happiest of Birthdays to Thomas Chick!

For those of you who came to the shop over the years know Thomas. Thomas was not only an employee of the shop and one of the reasons it didn't close any earlier than it did, but he's one of my best friends though we don't see each other like we used to.

I met Thomas through the original SciFiFX meetups at the comic shop that used to be across the street from where we were located. Les Webster had been working there and I happened to stop in one day. We struck up conversation and Les invited me out to the meeting which was held on second Saturdays every month. We all three, Les, Thomas and I, bonded over our love of comics and other Geek topics and started hanging out together by hitting other shops or going to the movies.

This was shortly after my wife had passed away and they were instrumental on keeping me from losing my sanity and both took to my daughter almost like fathers, or in Thomas' case, a big brother. She loves them both.

When I decided to open the shop, it was a no-brainer to bring in Thomas. His, and Les', knowledge of comics was a huge help for someone who loved them, but was not much on the in-depth history. I offered to hire Les, but he claimed he was retired and didn't want another job. Yet there he was helping out all the time.

Thomas was especially appreciated during my bout with pulmonary embolisms that I suffered in May of 2017. I was in the hospital for a week and out for another month while I convalesced. During that time, we went to short hours and a short work week, so that he didn't burn out. I couldn't have asked for anyone better than him.

Though we Facebook everyone once in a while, I miss the days before the shop when we would go comic shopping or hitting the latest movie.

Thomas, I appreciate you more than you'll ever know and I hope that you have the happiest of birthdays! 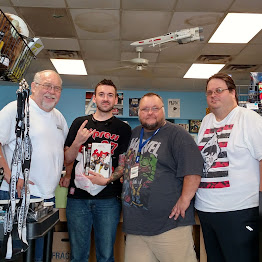 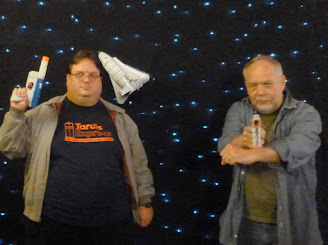