New Comic Book Day has, at least for the last twenty to twenty-five or so years, always been on a Wednesday. This was to allow comic books stores to be on even footing when selling with no one store starting  to sell before anyone else and to help smooth out distribution hiccups. I'm sure there are more reasons, but this is it in a nutshell.

Then comes along 2020 and it's lackey DC Publishing. I won't get into the details of how DC distributes it's comics but it's a mess. DC can't be nice and deliver comics on the same day as everyone else, they have to be poopy heads about it.

Before all of this, if you wanted to see what was coming out from everyone, I would have pointed you to Previewsworld, but they don't have the DC listings, at least not where I could find it. I thought I was doing everyone a favor by posting the release list here, but if it's missing a publisher, is it really doing you any good.

That's why I'm just going to offer you some links on how to keep up with your releases. 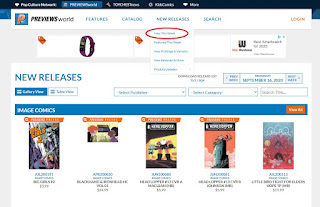 First off, for those that just want to peruse the list and don't really have any that they are tracking, you can find 95% of the publishers at Previewsworld. By going to the website and clicking on New Releases you get plenty of options from which to choose. But alas, no DC Comics. 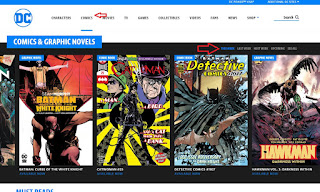 For that you can go to the DC website here. By clicking on Comics & Graphic Novels, you'll be presented with that weeks offerings and an option to browse upcoming weeks.

Alright, but what about those folks that are tracking certain issues or series? Well, you've got a few options there also.

If you were a customer at A Galaxy Called Dallas, you'll remember that we had implemented a new POS and website system called ComicHub. It's the brainchild of a guy out of New Zealand and I'm not sure why anyone hadn't put something like this together before. It allowed customers to keep track of their purchases, order ahead, know when it came in, earn discounts, and it allowed us to track sales better, inventory and sales trends. Unfortunately, right now there are only three DFW shops; Collected Ft Worth/Collected Keller and Red Pegasus in Oak Cliff. There is also Oiltown Comics down in Corsicana. ComicHub has plenty of videos and tutorials to show you how to get the most out of the website.

Another site that I've tried is one that I've always likened to "Facebook for comics." It's called League of Comic Geeks and it's got some pretty cools tools, though I haven't played with all of them yet. It allows you to track your pulls and even email them to your local shop. I've read where they've got things in the pipe for implementation down the line, but for now, it's not bad.

So, riddle me this? What do you use to browse the upcoming comics? Are you a pull list person or do you like to walk the shelves? Let me know in the comments below or message me.