Antarctic Press has been busy as of late with a new graphic novel, an artist change-up, and local artists lending their talents, and that's all in addition to a new show on Netflix.

Ben Dunn, who is a co-creator of Antarctic Press, has been busy. In July Netflix premiered WARRIOR NUN based upon his manga WARRIOR NUN AREALA  and it's already been greenlighted for a second season. 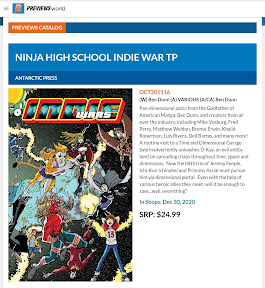 His next project is a graphic novel based in his NINJA HIGH SCHOOL universe. NINJA HIGH SCHOOL INDIE WAR TP concerns the release of an evil entity known as D-Kay and ensuing battle as heroes of NHS try to capture it. This epic story is helped along with artwork from many great talents including local Dallas artists! Look for art by Mike Vosburg, Fred Perry, Matthew Weldon, Bronte Erwin, Khalid Robertson, Luis Rivera, Dell Barras, Christy JediGoddess. Look for upcoming news about more of these artists. To get your copy of NINJA HIGH SCHOOL INDIE WAR TP it is being solicited in the October issue of PreviewsWorld and hits stores on December 30, 2020.
And last but not least, local artist Terry Parr has been signed to start penciling NINJA HIGH SCHOOL starting with issue #180. Word is that his wife Halo will do coloring. If you've never seen any of their art, they run SHONUFF STUDIOS and have the comic, AEROBICIDE: EXTREME NINJA WORKOUT. NHS #180 doesn't have a set date but should hit in December.
Make sure you let your favorite local comic shop know that you want these!
We wish much success to everyone involved!