The Mandalorian and Baby Yoda Return!

October 30th will see the return of THE MANDALORIAN and his ward, the Baby Yoda. We've already heard that Rosario Dawson will be showing up as Ahsoka Tano to the delight of many CLONE WARS fans. In the new Season Two trailer below, you'll notice a figure in the shadows. This new character is played by WWE superstar Sasha Banks, but there is still speculation to who she is. Many are talking on the interwebs that it may be Sabine Wren. In REBELS she associates with Ahsoka and it doesn't happen too much before the timeline of THE MANDALORIAN. 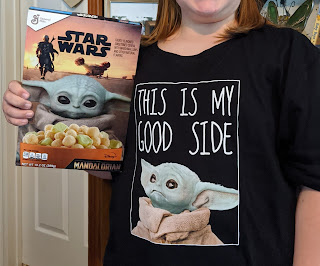 With the imminent approach of Season Two, these characters are everyone in the merch world. We had to pick up a shirt for school and some groceries and the Kid snagged two Baby Yoda items. For me, I'm just thrilled that it'll soon be back and so I'll binge the first season again.
So, are you ready for it? Have you watched it? What are you're thoughts about the mysterious lady?
Star Wars: Will Sabine Wren Be in The Mandalorian Season 2?
Mandalorian Season 2’s New Cast Members Seemingly Announced by Disney+ Germany