I wanted to just throw out there some of the cool people I met on Free Comic Book Day and what it was like to bring my 3 year old along with me. 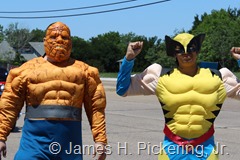 I knew that she would like the costumes, but once you put people in them, it can get a little dicey. My daughter is shy the first time around, but once she gets to know you or you give her food, she really opens up and can be a show-stopper. Or at least, that cute monkey that saves the show.

We started out over at Comic Book Craze in Garland. That’s where I met most of my new friends when I moved into the area last year, and so I have a few subscriptions there. The Kid got to pick up a My Little Pony and Daddy got to see his friend Todd Boddy get interviewed for the ScifiFX.com podcast. The shop’s owner, Matt McIntosh, and fellow sci-fi enthusiasts, Troy Rodgers, Jeremy Scott, and Carl Goad, form ScifiFX.com and they do a pretty good podcast. Todd Boddy has written a sci-fi novel called The Exit and is working on the sequel. He was just one of the many folks that they interviewed that day.

In addition, to Todd, you could meet E. C. Wolfe and get a taste of her upcoming novel, Yellow. I’m hoping to have a review of that sample here in the next week. J. A. Dalley was in store promoting his series, The Almek Manning Series. He is currently working on book 3 titled CALEDONIAN CABEL with THE ZOCHTIL being the first book.

Costumes were everywhere that day and the Kid loved it. Though she didn’t want to talk to the superheroes personally, she did enjoy watching them from behind a shelf or the comfort of her seat in the truck. 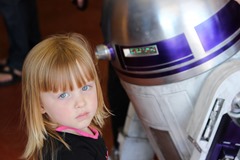 We travelled over to Zeus Comics where we could meet members of the 501st, Peter Mayhew (Chewbacca), Writer/Artist Phil Jimenez, Artist Stephen Sadowski, Web Cartoonist RK Milholland, Artist Robert Wilson, and Artist Benjamin Hall. I need to preface the rest of this post with the fact that my daughter has never seen Star Wars or any of the cartoons. We recently lost Mama to cancer and I’m trying to keep the violence and death to a minimum at the house. Even if it is storm troopers. Walking in the door, we were met by a throng of kids touching R2D2 and his beeping and chirping terror. At least, that’s what it sounded like to me. He may have been enjoying the tykes pushing and pulling buttons and dials, I don’t know. The Kid was a little apprehensive at first, but when she saw all the other kids, she joined in. She still didn’t know what to make of him.  We were headed to the back and here come Darth Vader. My child did a Fred Flinstone back peddle and ran behind my leg. It was so hard not to bust out laughing, but I had to maintain my composure, because, you know, I am her father and supposed to protect her from bad guys like him. Even though I persuaded her to continue on through the store, she kept an eye on him the entire time.

Until she met Chaka. You’ve seen her at the cons and will know her. The Kid walked right up to her and just stared at her costume. I believe was wearing a caped Wonder Woman outfit. Wonder Woman was Mommy’s nickname while battling her cancer and she knows the outfit, because we have pictures of her everywhere at the house. It was great that we finally got to meet her face to face, but unfortunately I didn’t get a photo of her that day, but here is her’s with you-know-who. Click the photo to check out her Facebook page.

As we were almost to our last destination, my child asked in all of her innocence who was the “black man?” Then she wanted to know if he was a good guy or a bad guy. I explained that he started out as good, then became bad, but in the end, he was a good guy. She asked why. All I could say was that getting killed by your mentor while trying to save your son will do that to you. Her response was, “I want to take a picture with him.” Too late to turn back now.

The last stop of the day was Awesome Comics off of Royal and Abrams. Great little shop with a little bit of everything and the staff is super-friendly and very well-read on their subject matter. I run into Thomas Chick of The Fellowship of the Geeks and mulled over the day’s exploits, picked up a few comics and headed home for a well-deserved nap. Yes, it was the Kid’s idea.

How was your FCBD? Meet any cool people or get any great reads? Send pictures or post your comments!