Kokomo, IN (PRWEB)
April 22, 2009 -- Starting May 1, 2009, BoomBrothers.net, an online
action and adventure web site, will conduct a sweepstakes to give away
six sets of Sgt. Fury and his Howling Commandos comics. A complete
year's collection of 12 issues of Sgt. Fury will be given away each
week to six lucky winners that enter the contest on the Boom Brothers
web site. Each comic book is in mint condition and has been sealed in a
package for over four decades. All anyone has to do to enter is go to www.BoomBrothers.net and sign up. And it is free. 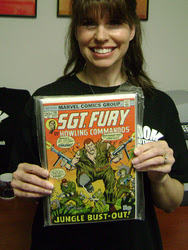 The Sgt. Fury comic book series was the brain child of Marvel Comics'
Stan Lee and Jack Kirby, two of the most famous names in comic book
history. The series was very popular and ran for 167 issues from May
1963 to December of 1981. Sgt. Fury and his Howling Commandos were a
group of nine specially selected U.S. Army Rangers who served under
Captain "Happy Sam" Sawyer. Fury was the cigar-chomping noncom who led
the racially- and ethnically-integrated unit. Members of the Howling
Commandos included an Afro-American, a Jewish soldier, a British
soldier, and a German defector among a diverse group of otherwise
American soldiers. The main character, Sgt. Nick Fury, later became the
leader of Marvel's super-spy agency, S.H.I.E.L.D.

"Our Boom Brothers comic book sweepstakes is sort of a gift for our
readers." said the series Creative Director, Richard Parker. "We think
giving away a full year -- 12 issues -- of these very entertaining
publications to somebody every week is a great 'thank you' for those
loyal fans who visit us regularly." In fact, past issues of Sgt. Fury
and his Howling Commandos have become collectors' items and many are
quite valuable. The web's Comics Price Guide lists a copy of a premiere
issue of Sgt. Fury and his Howling Commandos as worth up to $1,800.

BoomBrothers.net is the currently featuring the internet novel, "We're
Gonna Need Bigger Guns", where the brothers extract revenge from
drug-dealing Satanists who mercilessly killed their war hero father in
the first chapter. They then begin a secret vigilante life of ridding
the world of drug lords, terrorists, organized crime, traitors,
tyrannical dictators, and gang bangers. In the Boom Brothers stories,
every page of text is accompanied by an action-packed image beautifully
illustrated by internationally known comic book artist, Luis Guaragna.
Readers are contacted by e-mail when a new chapter is released about
every week. Visitors can sign up to read the novel at no charge.