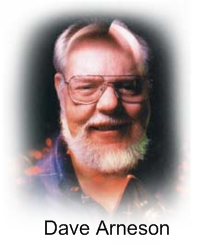 Starting in the mid-70's, Dungeon & Dragons has grown to a $1 billion empire. Almost 35 years later, it stills reigns as the most well-known games of it's genre. It should, it started the genre. Now, in just over a year, it has lost both of it's creators. Gary Gygax died March 4, 2008 and now, David Arneson has passed on April 7th, 2009. Both legends in the gaming community, they will be sorely missed. I met Gary in 1988 at GenCon XX in Milwaukee, Wisconsin, while stationed at Great Lakes, Il. Though I've never met Dave, I've played many games that he had a hand in creating. If you are a fan of any mmorpg, especially World of Warcraft, then you can also thank these men for they have had a indirect role in it's creation. God rest ye both.