Jonah Hex will be riding into a town near you sometime in 2010. Don't know who he is?
Well, let me see if I can fix that for you.

Jonah was created by writer John Albano and artist Tony DeZuniga and first seen in 1972
along with other characters, but eventually found his self-titled series in 1977. Michael
Fleisher penned the comic for 92 issues. In 1985, Jonah got cancelled but turned right
around and got an 18 issue run, again, penned by Fleisher. He finds himself thrown into
a post-apocalyptic 21st century. Justin Gray and Jimmy Palmiotti began a monthly
retelling of Jonah's adventurous life in 2005. This series was published without adhering
to the Comics Code which allowed for grittier content.

August 6th, 2010, will bring the arrival of Jonah Hex to the big screen. With Jimmy
Hayward at the helm, Josh Brolin will play Jonah and John Malkovich will play his
nemesis, Turnbull. Turnbull has it in his head that Jonah is responsible for his son's
death. Megan Fox will be playing a gun-toting saloon girl which should excite all the
geeks out there, me included. 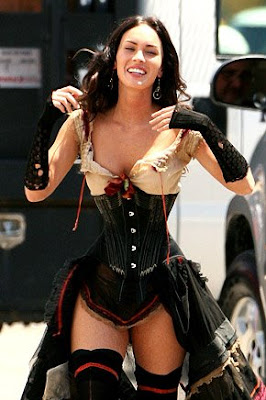 Were you ever a fan of Jonah Hex? Interested in the movie?
Got any comments or expectations about it then let me know
by posting here or shooting me an email.