Man, what a day! This was my first Free Comic Book Day experience and I loved it. I live right across the way from Boomerang Comics and so that was my first stop. It was rumored that the Dark Knight and Harley Quinn would make an appearance and they did. Neal Rhone put on a great event with free food from Jimmy John's Sandwiches and face painters. When I arrived there was a line to the door with kids of all ages (we older ones included) and their free comic books. Batman and Harley Quinn mingled with every one and I got a kick out of watching the little ones' faces as they spotted the duo.

After spending a little time dodging the crowd, I headed over to Area 51 in 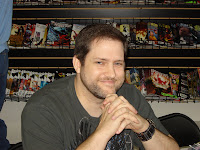 Grapevine. I arrived just in time for the swap meet. Tables out front were lined with miniatures, board games, and role-playing materials from games current and not-so-current. Just inside I met Brian Denham, illustrator of The X-Files comic series and my autographed purchase of the day, Iron Man: Hypervelocity. A very amiable guy, we conversed for about 15 or 20 minutes about comics, weather, and just general stuff. I explained to him that I'm having to reacquaint myself with comics after a 20 year absense, thus the lack of knowledge of current comic affairs. He had some great stuff for sale and was at the moment working on an ink sketch of Wolverine in his mask and outfit. One piece of note was his "President Evil" cover. I didn't realize that there were only 50 copies otherwise I would have bought one. 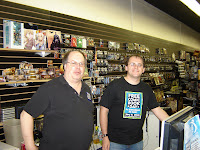 Moving on to the back of the store, the gaming tables were in motion. An D&D 4e session was going on and hopefully later on this week, I'll sit in with them and learn the new rules. One table had two young gentlemen, 9 and 11 years old, going head-to-head in a match of Axis & Allies Naval Miniatures: War At Sea. It ended in all ships being sunk, but both young men were still wearing big smiles and ready to play again. The next table had a WWII play surface that had some very realistic affects. My photos do not do it justice. The folks at Area 51, employees and customers, are very friendly and always look to help you either in a purchase or understanding a game.

As I said at the beginning, the day was a blast. The timing was perfect too, because later in the day, it stormed till late evening. Click here to go to see other photos and click here to see all the links for everyone I met.

Let me hear how your day went. I'd love to hear from you. 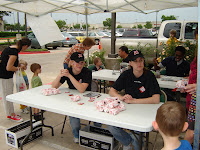 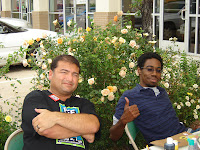