Ah, nothing kicks off the new year like the first convention of the year and nothing beats the Dallas Comic Con. Great guests, lots of your favorite artists, and hundreds of exhibitors to browse. Of course, this is all hearsay because this will be my first visit and I’m looking forward to it. 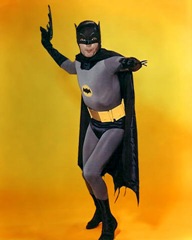 First off, it’s Adam freakin’ West. The original Batman. Okay, he’s no Dark Knight, but it’s the  original Batman! You also have Charisma Carpenter from Buffy, Angel, and Legend of the Seeker along with Daniel Cudmore of X-men 2 and The Last Stand and Twilight. Peter Mayhew was added after Alan Harris postponed due to a bloodclot. Herb Jefferson, Jr. is still in attendance. For all you young folks, it’s the original Boomer from Battlestar Galactica! Can’t wait to meet him!

There will also be tons of artists, but I’m looking for my two local favorites, Brian Denham and Josh Howard. Denham is penning the new story arc for Angel that started in issue #28 and Howard has just this past year had an offer to turn his Dead@17 into a movie. Keep a watch out for these folks.

The Variants are also going to be there. If you haven’t heard of these folks then you need to check them out ! Richard, Barry, Keli, and Joe of Zeus Comics in Dallas will be on-hand promoting their web show. Episode 6 is up on the site so it shouldn’t take long to catch up!

The recently crowned official Woman of The Web by G4 will also be there, local girl Katrina known as Action Flick Chick. She was featured on Attack of The Show for her coverage of the last comic con. 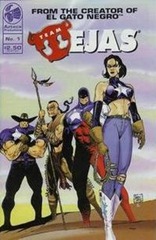 I did a double-take on this last fellow. To preface, I was in a Half Price bookstore about 7 months  back and was browsing the comics bin when I came across a comic called Team Tejas. I love locals so I picked it up to do a little research. To my surprise I saw that it was also autographed. Couldn’t find any information  at the time but lo and behold I see the comic’s creator Richard Dominguez on the docket for the con. I will be bringing my copy and having him sign it again for me.

Dallas Comic Con will be held at the Richardson Civic Center in Richardson, Texas January 30th and 31st. Hours are 11am to 6pm on Saturday and Noon to 4pm on Sunday. Priority Access Passes are sold out but the Celebrity Access Tickets are still selling for $20. That is good for both days according  to the site and is a great deal especially when it’s the same as a general access but you get media area access. If you get the chance to go be sure and link me the photos and tell me your stories!