Greats gifts and purchases this holiday

Got some good swag for Christmas and found some great deals while tooling around this past week. I have to say thank you to my in-laws for supporting my gaming habit. I got ‘Dragon Age: Origins’ for the PC and having to re-schedule life around my sessions. 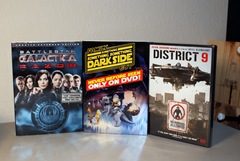 I hit the local Half Price book store with my wife today and found '”BSG: Razor” for cheap. I also purchased ‘District 9’ and ‘Something Something Something Dark Side’ to satisfy my movie cravings. Now, to add those to my already busy schedule. 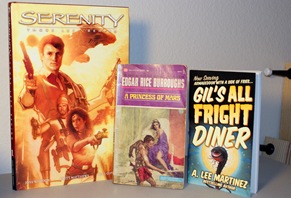 In books, I had to get my ‘Serenity’ fix, so I purchased “Those Left Behind”.  I also found “A Princess of Mars” by Edgar Rice Burroughs in a Ballantine print from 1964. It’s a second printing but it’s in pretty good shape so I got it to keep on the shelf and a extra copy by a more recent publisher to read. This is going to probably be the setting for the new John Carter of Mars that is filming as we speak. I’m also reading a book by A. Lee Martinez called “Gil’s All Fright Diner” and it’s a hoot! It’s been described as similar to Douglas Adams in it’s humor and I seriously like and look forward to more. Born in El Paso, Martinez now lives in Dallas which means I’ll add him to my list of local authors and get that posted.
With the new year, I think I’m gonna try and revamp the site a little so expect some changes. In the meantime, let me know what you think and drop a comment.