This was my first Fandays visit and I was not disappointed, except when it was over. I think next year I will be getting the all-weekend pass and just geekin’ it out. I had heard about the line debacle back in May with Dallas Comic Con, but after talking with a few that had gone to it and seen interviews and videos from others, I figures with a little preparation, I’d be fine.

Upon arriving at the Irving Convention Center, I was immediately escorted to the ticket booth, and thought, “this isn’t so bad,” but was then escorted back out to the line. Dreams dashed, I settled in and waited. Time flew by pretty quickly and once the doors were opened up, I only waited about ten minutes to get in. 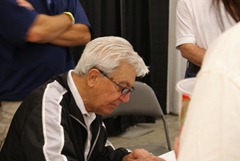 I always like to walk the exhibitor’s hall once and get a lay of the land and to take pictures. There was plenty of eye candy for the photographer and merchandise to be had this year. I walked a little bit with my friends, Les and Thomas of The Fellowship of the Geeks, and made mental notes of things I might come back to buy. On the back

wall, Al Plastino was signing a old issue of Superman. I overheard him tell the guy that even in the condition it was in, he figured it was worth $900. And that was before he signed it. Ralph Bakshi was in a good mood when I asked him for a photograph!

Also, got to meet up with my good friend Thomas Branch. It seems that he has some good news of which I will report on later, but it does concern some of  his artwork, so stay tuned for that.

Stopped by Eddie Medina’s table and talked for a little bit. When he heard that my daughter is a Wonder Woman fan, he helped round out her collection with something to put up on her wall. Thank you, Eddie! She loved it!

Gloria Oliver, a local author, had a table and I got to talk to her for a bit. She loves to sit and fan watch and she takes some really good photos. If you follow her on Twitter, you can keep up with all the cool costumes.

A few months back, I met A. J. Moore at a small comic book get-together and became an instant fan of his children’s comic, Dorse. He was back at Fandays with more Dorse goods and will soon have Dorse plushes which my kid will really love.

Another guy that I met a few months back and really like is Matt Largent. He is the creator of an animated Star Trek parody – Stalled Trek: Amutt Time and it’s hilarious. If you can get your hands on a copy, do check it out. 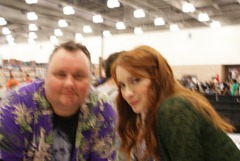 My brushes with fame came late in the day. With money being tight, I was going to pass up on autographs this year, but my crush was in town. Yes, my wife knows about her. Felicia Day and Eddie McClintock were side by side and so, I decided to get his autograph, as well as Felicia’s. Let me just say that Felicia is as pretty in person as she is in photos or on camera. Most celebrities look different, and not in a good way, when met in person, but not her. She is, also, just as sweet and pleasant to meet. I had to ask her how she handles her schedule, because she seems to be everywhere these days. If not producing The Guild or working on Geek & Sundry, she’s reading and posting reviews on Goodreads, or doing interviews or writing! I recently read a post on Lifehacker.com about how she works, her workflow and the different types of gadgets she uses and when I told her that I didn’t believe that article at all, she admitted that those types of days were few and far between. Some days it all production work, some are all writing, and she says that she gets away quite a bit. Can’t blame her. I was able to get an autographed Guild still and a photo of the two of us. It came out blurry, so I’ve decided next time, I’m bringing my own photographer! 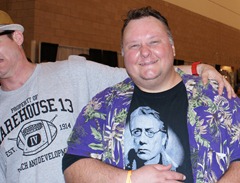 Eddie McClintock was right next to her and he was having a good time. I had him autograph a photo for my wife and asked for a photo of me and him. As he stepped out for our photo, he photo-bombed Felicia’s picture with a fan. I’m hoping that person will post it somewhere, so I can see it. Felicia with bunny ears and Eddie grinning maniacally over their shoulders! Laughs all around and a little dance from Eddie AND THEN he photo bombs us! Seems I didn’t understand what a “lean-out” photo  listed on his sign was. I saw several types of photos listed and I should have known it was a joke when I saw “Side Glance – $80.” Just as his sidekick snaps the photo, Eddie leans out so you can only see half of his head! It was pretty funny and he gave me a bro-hug, so I’m not complaining. I will say that his character on Warehouse 13 is not too different from the real person!

Have you got any interesting stories to tell? Fandays nightmares? Tell us about them!