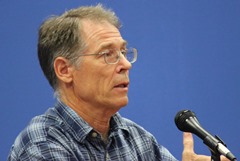 I had the pleasure of sitting in on a panel at the 71st World Science Fiction Convention or LoneStarCon 3 in San Antonio this weekend. The panel was titled Reclaiming the Solar System and discussed how stories about our solar system weren’t told as much as the worlds that lay outside of it’s boundaries. As our space probes pressed on to other stars, our imaginations went with them. Robinson, along with Joe Haldeman, Greg Benford, and Alistair Reynolds spoke of possible new stories to come and the different locations within our system that would make great locations for a tall tale.

Robinson’s new book, Shaman, takes place on our own planet back in the days of early man.

There is Thorn, a shaman himself. He lives to pass down his wisdom and his stories -- to teach those who would follow in his footsteps.

There is Heather, the healer who, in many ways, holds the clan together.

There is Elga, an outsider and the bringer of change.

And then there is Loon, the next shaman, who is determined to find his own path. But in a world so treacherous, that journey is never simple -- and where it may lead is never certain.

SHAMAN is a powerful, thrilling and heartbreaking story of one young man's journey into adulthood -- and an awe-inspiring vision of how we lived thirty thousand years ago.

Are you a fan of Kim Stanley Robinson? What is it about his writing that you like?