Frederik Pohl, who developed a love of science fiction in his life and never lost that love, passed away on Monday at the age of 93. 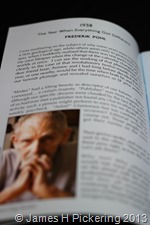 I have in my possession from LoneStarCon 3, the pamphlet that they handed out at the Hugo Awards ceremony. It’s actually two pamphlets-in-one, where the back half is a guide to the 1939 Retro Hugos. These are Hugos that will be awarded in London at the LondonCon 2014 to works from 1939. No Hugos were given that year and this is a way of honoring past works.

In this pamphlet, Frederik Pohl tells a story of 1938. A year that was a turning point for he and his friend, Isaac Asimov. They both were fans of science fiction and in their enjoyment of it, wrote stories. But this year, they decided to do more than be fans. They wanted to be pros, to be considered among the greats of that day.

So, he goes on to tell how he and Asimov, using different techniques, got into the publishing business. Asimov wrote several stories and submitted them to John Campbell until one was bought. Pohl on the other hand, didn’t want to copy Asimov’s move and there was only one Campbell, so he goes and starts asking editors at the pulps if they needed an assistant to help in reading all those submissions. He reasoned that would leave them more time to take care of other important things and he would then be considered a professional.

All turned him down saying that it wasn’t in the budget, but someone told him to check out Harry Steeger. Steeger was rumored to have several pulps that he was starting and the idea was maybe he would give Pohl one to edit. And he did. And the rest is history.