I can remember it like it was yesterday. Or, about seven days ago. Okay, so I’m late posting. I got a month old that eats like me. Does a lot of things like me that in one sense makes me proud but in another sense scares the livin’ poop outta me!

Anyway, despite the cold weather and the late night before, I was up and ready to hit the road. Fortunately, the weather wasn’t as bad as the weatherman made it out to be, so I arrived safely. I arrived about 11am which is when the doors officially opened and parking was not that bad. The Richardson Civic Center is not that big, but seem to be just the right size for the event. A small line was at the door but since I had purchased my tickets online, I got to walk right in. Previous experiences have led me to making sure I get my tickets early.

I was really excited to meet Batman (TV), Adam West , but there seemed to be a line waiting for him so I thought it a good idea to peruse the exhibit room. Dealers of every sort were on hand, including Boomerang Comics and the Austin Brown Coats. Saw so many cool things that I wish I had won the lottery.

Made my rounds to all the different artists and made it a point to track down my favorite locals. One of the first was Joel Watson at HijiNKS ENSUE. He recognized his t-shirt that I was wearing and I got him to sign a “Godspeed You Fancy Bastard”.

Just around the corner, I found Joe, Vlad, and Barry from the Variants courtesy of Zeus Comics. Keli showed up later, but Richard didn’t get there until after I had left. I did get Joe to draw a Terrible Sketch. I had him do Spider-man in tribute to episode 5. Check out the Variants website to catch up. 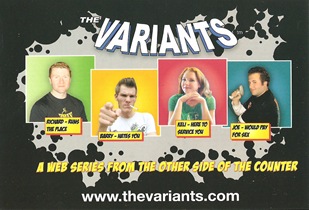 Also in attendance were two of my favorite local comic book artists, Josh Howard and Brian Denham. Josh is working on a one-shot Ghostbusters for IDW and says that his cover art got accepted without any changes which is pretty cool. Dead@17 is also in development for a 2011 movie release. Looking forward to that. Brian Denham is also keeping busy with Angel. He takes over drawing in #28 and it’s getting great reviews. He’s also doing the new Olivia Munn one-shot for Antarctic Press and the cover that I saw was awesome. Will have to wait and see if the story is any good. 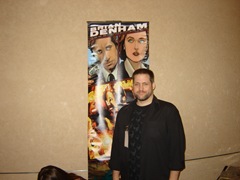 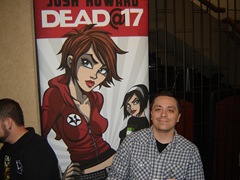 I sat in on a panel presented by Devin Pike of Red Carpet Crash, Katrina Hill of Action Flick Chick, and Mark Walters of Big Fan Boy about what’s new in 2010 as far as movies go. It also kicked off with Bob Wayne of DC comics. He’s the VP of Sales and is in the know for what’s coming from their vaults in 2010, but he did have a lot of “I can’t divulge that” comments. I can kinda understand, but hey, Bob, toss us a bone, will ya!

And last but not least! I got to meet Batman! The original caped crusader! TV Batman – Adam West! Well, most of you younger ones only know him as Mayor of Quahog on Family Guy (or Adam We – you know the episode). I didn’t get to talk to him as much as I liked because he had a handler, but I did get to shake his hand and what an honor it was to meet him. I was grinning the rest of the day just from that moment. I even commented about it on Geek Orthodox’s post here.

Yea, Charisma Carpenter and Colossus from X2 and X3 were there, but no disrespect, I didn’t connect with them like I did Anne Lockhart and Herb Jefferson, Jr. Sheba and Boomer from Battlestar Galactica TOS were signing autographs and talking with fans. I met Anne last year at All Con and she’s a delight to talk to and Herb is a big supporter of the troops with his work with the USO and the Marine’s Toys For Tots programs. If you ever get the chance to meet them, do. 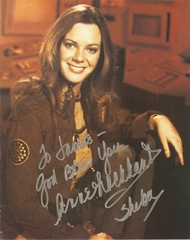 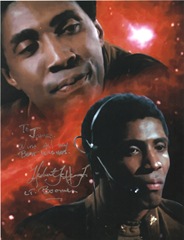 If you have any stories you’d like to relate, please do or send me links to your photos. Mine can be viewed on my facebook page.