Sleeper Awakes: The Third Book in the Hidden Lands of Nod by Robert Stikmanz 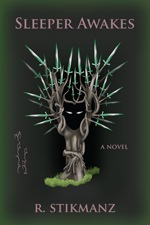 I was lured to this book by the promise of a fantasy world returning to our present existence and  conspiracies run amok. What we believed long since extinct, or to have never existed at all appears easily enough and a danger lurks at every turn.

The Traveler, a man named Boyd, survives a holocaust of what seems to be natural origin, but after waking in a hospital, soon realizes that it was anything but natural. Dogged by a government agent and a case of amnesia, he races cross country to find safety and his memory.

Along the way, he finds that our existence is not quite what it seems. What he knew of dwarves, elves, sprites, and fairies from storybooks are just misinterpreted factual beings and it would seem that they are his only hope of survival and he, theirs’.

I will admit when I started to read this book, I wondered if I had been led astray. After a murky start, the story picks up speed and once it does, you don’t want to put it down. I have very limited time to read due to a new-born and work, but I learned to juggle book, bottle, and baby just to be able to finish it. But, finish it I did.

I have to admit that Boyd does seem to be a bit daft at times. He doesn’t seem to get even the most simple points concerning his situation but Mr. Stikmanz may have played him ignorant to point out just how fanciful and unbelievable the situation was in the first place. I loved the three Dvarsh characters (dwarves) but I believe my favorite was Sigismunde. In my mind's eye, I either pictured him as a fey Tommy Chong (without the herbal additive) or Sgt. Floyd Pepper from the muppets band, Dr. Teeth and the Electric Mayhem. Sorry, that’s just how I see him.

I feel that if you give it a chance, you’ll love this book. You can pick it up on the author’s website or at Amazon, but the last time I looked, Amazon was down to two copies. You can see Mr. Stikmanz in the next couple of weeks at these conventions.