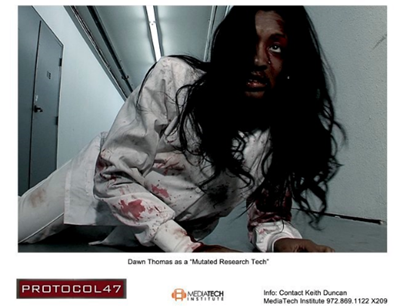 Came across this article is the Lewisville Star the other day. Weird story. I’ve never picked up the Star, but I was headed to my new favorite place to eat, Fuzzy’s Tacos, and saw the news stand. Something told me to pick up a paper. Convincingly enough, that after the door slipped out of my hands and I lost fifty cents, I’ll still put in another fifty cents. And there on the front page was the article about ‘Protocol 47’.

In "PROTOCOL 47" a secret nuclear research facility is testing a new power source when an accident happens. A new type of radiation is created that alters the researchers into a myriad of things. Some go mad and attack others, some become depressed and kill themselves, but others make a startling change. It is up to those in a distant control facility to decide whether the researchers live or whether they invoke the dreaded "PROTOCOL 47". PARENTAL ADVISORY: FILM CONTAINS ADULT LANGUAGE, LIGHT GORE and VIOLENCE.

This movie is an independent made by the students at MediaTech Institute in Las Colinas. Basically, it’s a recording school that also has a turntablism class and a music business program. This is the class project and their doing a free screening at Studio Movie Grill in Lewisville.

An independent short film, entitled "PROTOCOL 47", made by local student filmmakers will be presented Thursday, March 18, 2010 at the Studio Movie Grill- Lewisville, 1600 S. Stemmons Freeway (at Corporate Drive) Lewisville, Texas 75067. The film will be shown at two different screening times one at 6:30 PM and another at 8:30 PM. The film is produced by the MediaTech Institute-Dallas Campus in Las Colinas.

There are some actual “veterans” helping with the piece, so you might recognize one or two of them.


"PROTOCOL 47" is an intense, character driven drama starring Stephanie Rhodes of "Friday 13th" (2009) and directed by Russian born Valentina Vladi. In addition to "PROTOCOL 47", a companion behind-the-scenes documentary film about the making of "PROTOCOL 47" will also be shown. There will be a filmmaker Q & A providing a unique opportunity for other aspiring filmmakers or screenwriters to receive inside perspectives.

I’m gonna do my best to make one of the screenings, don’t know which one yet, but if enough of you want to meet up, maybe we can pick one and meet. Post in the comments below, shoot me an email to agalaxycalleddallas (at) gmail (dot) com, tweet me at @galaxy_dallas, or get me on my fan page on FaceBook at A Galaxy Called Dallas.