These are the continuing journeys of me, James Pickering, and Les Webster of The Fellowship of the Geeks, as we ply the crowds at our first 71st World Science Fiction Convention or known as Lone Star Con 3! 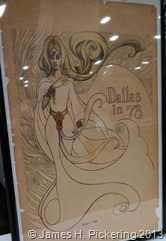 I’ve never been a very good planner. My wife was always the one that had every detail written down and every checklist checked. Very organized. Me? I relied very heavily on her. Ever since she passed away, I’ve been flying by the seat of my pants. This trip is no exception. I didn’t even know I was coming down here until about six weeks ago. I bought two tickets from Jaye Wells and Nicole Peeler. I didn’t have a partner to bring, but I figured it wouldn’t be hard to find one. Nope, wasn’t hard at all. 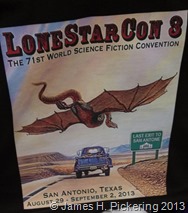 The hard part was booking a hotel near the convention. Where the convention website said that you could book rooms at the Marriott Rivercenter or Marriott Riverwalk, I found it necessary to book mine at the COURTYARD Marriott Riverwalk. Just a mere half mile from the hotel, but in the Texas heat, I might as well be humping a pack in the Sahara for the French Foreign Legion. By the time Les and I got there we were sweat-soaked. What else could we do? We bought t-shirts which were handily being sold right inside the doorways.

This is our first time at a WORLD convention, so we were a little under-whelmed at the crowd, but considering that it was a Thursday, the first day of a five day convention, I figured the real crowds would hit on Saturday. That’s fine. Gives me more time to browse, shoot video, talk to people and plan my purchases. And boy, is there a lot that I want to purchase. This is a book lovers paradise! And the authors walk amongst us. Gail Carriger came by us looking retro-fashionable as always. Minutes later, I’m staring at books and half-listening to a conversation between Les and Willie Siros, and never realized it was him. It wasn’t until much later when reading the con guide that I saw a picture of him and remembered. We got a chance to talk to Joe R. Lansdale at a table and later we’re gawking as George R. R. Martin comes walking through trailed by his entourage.

There’s a really cool Doctor Who 50th Anniversary Exhibit that I will have more information on in later posts and a history of the World Con. There’s just a lot to cover and after walking all the way down and all the way back and all the while we were there, we were pooped when we got back to the hotel. No parties for us this night. We came home cooled down and then went back out to have dinner at Waxy O’Connor’s Irish Pub. Great food! Get the Spinach Dip. I swear it’s got Guinness in it. Oh, and Les says try the Bangers & Mash.