FanBoys and the 501st at MovieGeekFeed bash

So, I just got back from the MovieGeekFeed birthday event where we watched Star Wars: Phantom Menace and Fanboys. Some vendors were already set up when I got there and so I got to browse some really cool stuff. Thankfully, they will all be at the swap meet this Saturday and Sunday. I should have some allowance by then . . . if my wife let’s me have any. The 501st showed about 6:30 with Lord Vader and his Imperial Guard (it was all I could do to not yell “don’t taze me ‘bro”), sand troopers, scout troopers, and some that I didn’t recognize in attendance. It was a great sight and got me geared up for the movie. 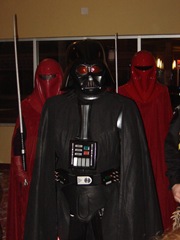 I got my soda and sat down and the crawl began. The music and the crawl always gave me goose bumps and it still does to this day. The grandeur and the scope of these movies will always keep me watching. And then Jar Jar showed up. I had forgotten how much I loathed Jar Jar. The whole high-pitched hodge-podge that he spoke was unbearable until the wooden whiney acting of young Anikan came along. By the way, they had an “Anakin Skywalker Whine Off” at the beginning of the evening. Anyway, the great special effects and fight choreography kept me sane.

As many times as I’ve seen this movie I will never get over the climatic fight between Qui-Gon Jin and Darth Maul. The music makes the scene. I think the title is called “Dual of Fates” and it’s that music that makes the death of Qui-gon tear me up every time I see it. You’ve got to hand it to Ray Park, he makes Maul one bad dude. 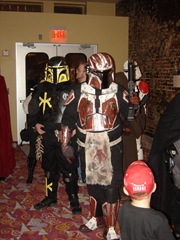 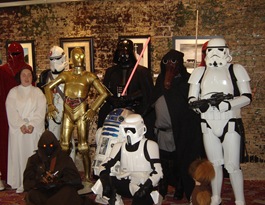 There were more photos before Fanboys came on, so I took a few more and got me another soda and grabbed a seat. I had never seen this movie but I had heard that it was funny so I was anxious to watch it. I was not disappointed. I knew these same characters when I was a kid and we had the same discussions and same arguments. The cameos by Carrie Fisher, Billy Dee Williams, William Shatner, Kevin Smith and Jason Mewes were awesome, but the best for me was Ray Park as the security guard (THX-1138 outfit) telling Windows, “Time for you to get mauled, boy.”

All in all, I had a great time and look forward to seeing a few of the folks on Saturday and Sunday. If you came to the show, let me know how you enjoyed it and if you got any photos, send me a link. Here are mine.