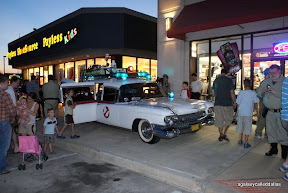 So, I got word at the last minute about the Ghostbusters
game release party at the local Gamestop. Thanks to my
friendly neighborhood Boomerang Comics owner, Neal for
the heads up. I was already in a rush trying to get this
computer back up. Last Wednesday nights storms knocked
out my video card and my ethernet. No pictures and no net.
Not a good combo. But, it's back up with a stepped-up
video card and right as rain (no pun intended.) Anyway, I
hustled back to the house to get the news on the site and
to twitter. If you don't twitter, the link is to the right.

I headed to the Gamestop about nine and there was a small crowd
already gathering. The Ecto-1 was there and lights were flashing
and I was as giddy as the first day I saw the movie! I got
lots of pictures and you can see the rest here. There is even
a cute ghostbuster wearing what I would consider a "non-
standard issue" uniform. You'll have to go to the link to see

her. There was food and give-aways and "Ghostbusters"
playing on the speakers and it was just cool! Geeky Cool!

The local Dallas Ghostbusters were in attendance with
full gear. They were helping with the drawings and
demonstrating the equipment as well as posing for photos.
I found this video from another day. The guys who shot the
video are 8 Bit Mickey and ClassyMan for The Game Heroes
web-site. You can check out their page here and hopefully
they'll have video up soon for tonight.

I got a chance to talk to Dewayne who is the caretaker of
Ecto-1. Unfortunately, I didn't get his last name but then
again, I'm not a journalist. I did ask Dewayne a few questions
and he was happy to answer them for me. The car is still owned
by Sony and makes the rounds for all the cons and openings.
He was recently at E3 and actually got to play the demo. His
review was that the controls were a little difficult but his not
being a big video game player may have been the contributing
factor there. After this he's loading Ecto-1 back in the trailer
and headed to California and I wished him a safe trip.

If anyone got a chance to go and has pictures they would
like to share or if you want to share a story, please shoot
me an email at agalaxycalleddallas@gmail.com

P.S. I am aware that the Dallas Ghostbusters site is not
working. I will keep you posted on that.