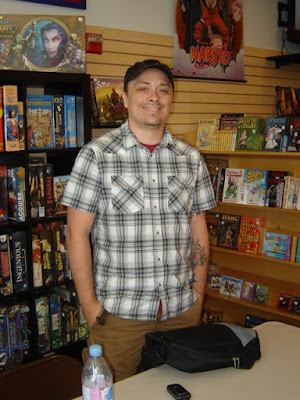 I know, I'm slow. This happened last Saturday and here it is a week later and
I'm just now posting about it. Well, I've been busy, but I'm here now. When
I got to Boomerang Comics on Saturday the 20th, Josh was already surrounded
by people and drawing complimentary art for them.

I ran into and met a few other new people (new to me at least) and
while we waited we talked about the usual things. One question that popped
up concerned how to do what you love and make a living until doing what you
love makes the living for you. Well, the perfect example was sitting right there in front
of us, drawing pictures and signing copies. I asked Josh what was his gig like
before he got signed and he told me that he used to do temp jobs like data entry.
He also worked the comic book shops and what not. Jamel and I agreed that if
we could work at a comic shop or gaming shop, it would not be considered a j-o-b.
In fact, those were the first places that I started applying when looking for a job.
I know these places don't pay alot, but I'm a firm believer that if you work
hard enough the money will come to you. Josh is evidence of that.

It's guys like him that give the amateurs hope. When nobody would publish him, Josh
went out and made copies at Kinko's and stapled them together and handed them
out. He got a fan base going and publishers notice that kind of thing. That led us to
talking about web comics and online publishers like lulu.com. See Jamel. I told you I'd
remember the name of it, eventually. Sure, you can do the Kinko's route and get
noticed locally, but nowadays you can get self-published online and get noticed
everywhere.

MovieGeekFeed got a chance to interview Josh while Jamel and I continued
to talk with Dan and Zach. You can view the interview here. I'm the guy that you can hear in the
background of the interview. I've already apologized on MGF and I'm
apologizing here. I didn't realize that I talk that loud, so here on out I'll only
whisper. Yeah, that'll last a while.

P.S. Just came across some new artwork of Josh's here.