Like A Chicken With My Head Cut Off Part 2

Yesterday, I decided to keep it low key and stayed at FenCon in Addison. With the weather change, my bones were achin’ me somethin’ fierce! You young’uns will learn soon enough about old age, but anyway. I ended up hanging out with my buddy Tom Branch and chasing artists and authors.

Tom happened to be looking for Charles Vess to sign his hardcover of ‘Stardust' by Neil Gaiman. Me, being a complete noob, knew that I had seen Vess’ work before, but didn’t realize until after I got home that he also did ‘Blueberry Girl’ by Gaiman, which was done for Tori Amos and her yet-to-be-born baby. I have a copy that I got for my daughter shortly after she was born. Oh, well, I’m sure I’ll see him again soon. 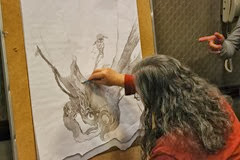 The fun part for Tom was chasing Vess around the Crowne Plaza. I watched. It was fun. The first time, he was in a panel, so we lurked outside. He came out of the crowd, Tom dropped in behind, turned the corner. Then, came back to me. He said Vess pulled a Houdini and disappeared the instant he went around the corner. He did that two more times. I asked if there was a Diagon Alley sort of hidden pathway and was rewarded with the answer that yes, there was a service corridor that ran between some of the rooms. Whether he was using these, I’m not sure, but that’s where 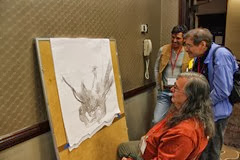 my money was. Tom eventually found him in the gallery working on a piece to be auctioned off, I think. It was beautiful and a great honor to be able to watch him work. Oh, and who was standing there watching him work? Award-winning Texas artist Vincent Villafranca! He designed the base for the Hugo Award this year and there was even a Hugo on display. Great work! Here's a shot from the Hugo Award site of the trophy.

My chase was with A. Lee Martinez. I needed his new book, HELEN AND TROY’S EPIC ROAD QUEST, so ducked into the vendor’s room while he was signing books. Technology stepped in the way and while I was lined up to check out, something happened to the dealer’s phone while he was running the credit card, and blah, blah, blah, it took so long that by the time I got back out, Martinez was gone. But knowing the elusive Mr. Martinez’s habits, I found him down on the first floor in the Gaming Area. He was nice enough to sign and we talked . . . well, I fawned a little over his works and the day was done.

Sunday I will be at Fan Days and then off to relax before starting the week. Yay.